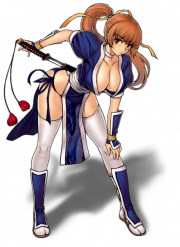 Kasumi
From: Dead or Alive

Kasumi is one of the Slaves that you can train in the game. This girl was born in a secret village that followed a strict tradition of training in martial arts. She participated in a tournament at Mardukane, where the winner gets fabulous wealth and everyone else gets enslaved. Unfortunately, she lost in the finals. You decide to also train her in martial arts to ease her into her new life as a slave. Her Blood Type is B.