Some of the 3rd person slaves with special endings are gamebreaking

The following bugs I have had happen, no idea why they happened though.

Another bug, this time with Orihime, played over 400 days with only visiting areas while being cursed and wearing teh demon dress, not a single shdow encounter and I ran into matsumoto only once.

The script about the nins work as it should though

'Also every so often I end up with my potion list ending up as UNDEFINED and showing me as owning every single potion, even those I have never aquiered, none of them can be used and buying more does not fix the issue.

'Apperantly I have trained 100 cumsluts after just finishing up my first playthrough with Shampoo.

'Once upon reloading because I accidently missed out on some text in an ending I stopped getting into the skill upgrade menu despite getting into it on that file just moments before.

Rei's corruption stat description shows in the text windo and not as a popup.

Inuhman ancestry are selectible by females, despite teh fact that the wiki shows it as a male only thing you can pick, suggest fixing and giving pure females a posibility for a demonic background too, as not everyone are into dickgirls.

a few places shows females as he.

Queen Menace's Enslaved by Menace Bad Ending fails to name the assistant at two occations, and seems to be missing some text at the beginning, as there are no explenation as to why you don't fight back at all at the very beginning of those events.

If you choose to Talk to Your Slaves at Night until the end of the night, there is a chance you won't be taken to the next day and will not be able to perform any additional training. 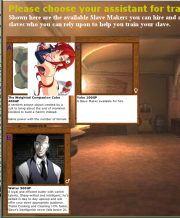