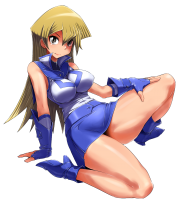 Alexis is one of the Slaves that you can train in the game. Alexis was a student at a fancy academy in a far off land, until a ruler named the Supreme King came and took over the kingdom. He made the academy into his palace, shortly arriving he noticed Alexis' special talent to track monsters and being able to seduce them. He then brings her to Mioya to be trained as his slave, as well as to use her talent to get monsters to join his army.