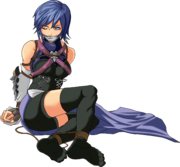 Aqua is one of the Slaves that you can train in the game. Former apprentice of a legendary slave trainer named Eraqus, famed for his gentle but firm training method. She was put into slavery after being found at his murdered body, and refusing to speak in her own defense.

Training Requirement: Meet her as an NPC, and have Renown >= 60