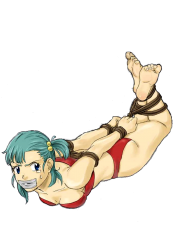 Created by: abisal
Since Version: 3.2
SlaveGirl20.txt

Bulma is one of the Slaves that you can train in the game. She was a genius girl born in a rich family. After her father died, Bulma inherited her father company and become one of the richest single women in the kingdom. But her life still lacked something: Love. She would find it in a mysterious gentleman known as V. Bulma quickly fell in love with him, they become engaged and she declared him vice-president of her company. But, unknown to her, V has other plans than marriage. One day, Bulma woke up to find herself tied and on her way to a new place. Apparently, her boyfriend has accused her of her father’s murder and, as such, she had been sentenced to slavery and she was sold to her own ex-boyfriend, V, who now owned her family’s company. Her Blood Type is B.