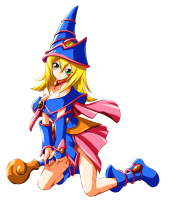 Created by: Regigigas
Since Version: 3.2.05
SlaveGirl54.txt

Dark Magician Girl is one of the Slaves that you can train in the game. Recently a young, beautiful, and mysterious sorceress has wandered into town. She is only known as the Dark Magician Girl. Shortly after she arrived, mysterious occurrences started to happen. The townspeople blamed her, and convinced the palace sorceress to help them. This Dark Magician Girl was subdued by the royal sorceress and put into slavery. However, since this new slave is a sorceress as well, she will need to be trained to use her magic ONLY when ordered to by her owner, and ONLY to do WHAT she is ordered to do. You are assigned to train her. You take a look at this new slave you are training. To your surprise, she is actually both cute and sexy; a nearly impossible combination to pull off, but she manages to pull it off quite well. You are also given a book that has been enchanted to list all the spells she knows. After talking to her, you learn that the kind of magic she specializes in is Black Magic. However, she can somewhat resist its corruption, but she can not use it too much or it will corrupt her. Her Blood Type is A.