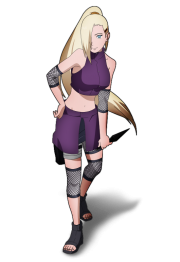 Ino is one of the Slaves that you can train in the game. A mysterious girl who has approached you in hopes of becoming your apprentice. She appears to be well trained in martial arts, if rather strong willed. Her Blood Type is B.

Ino does not have any unique endings. She can only get General Endings and Additional Endings.