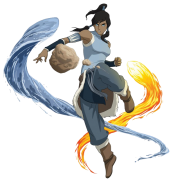 Korra
From: Avatar: Legand of Korra

Created by: Discord and abisal
Since Version:
SlaveGirl.txt