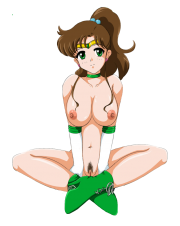 Makoto is one of the Slaves that you can train in the game. A busty tomboy. She is very tough despite her petite look. Many men often try to grope her massive tits, to which she responds by beating them up. However, this eventually got her into trouble when a noble came on to her in this manner. She resorted to violence, as she tends to do, and beat the shit out of him, only to find herself on wanted posters, being captured, and hauled in front of a magistrate and declared the property of the very person she defeated the night before. The noble then brings her to you (the slave maker), since he has no chance of earning enough respect to get her to obey him, on his own. He states, that he wants her to be skilled in housework and sex, while also training her as a skilled fighter as a gladiator slave in the arena. Her Blood Type is AB.

Makoto does not have any unique endings. She can only get General Endings and Additional Endings.