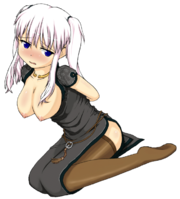 Nao Mariota Pryderi is one of the Slaves that you can train in the game. Nao lived as a vagrent, wandering from place to place she had made a decent life for herself and even though Nao rarely had money she often found friends amongst the elves and in nature. The elves being very sexually unihibited Nao frequently found herself without any clothes, simply wandering around naked, quite often joining in the Elven parties. The Lord eventually learned of the Noble's corruption stripped him of all lands and auctioned off all his assets. Nao being unfortunate enough to have been included amongst the assets was sent off to be sold at auction where you have purchased her. Her Blood Type is O.

Large breasted slave who likes to use her tits for sex.