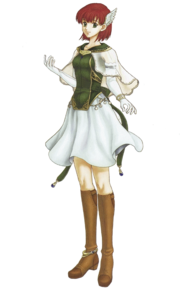 Description: A kind noblewoman. After she has left her kingdom to avoid an arranged marriage, she were captured by a band of deserters who ‘‘used’’ her to satisfied their huge libido. After they were done, they wanted to silence her, but one of them, a mysterious Wyvern Rider, insists that she’s being sold into slavery instead. She’s appears to have accepted her condition... Her Blood Type is AB.