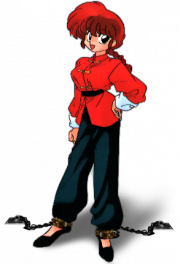 Ranma is one of the Slaves that you can train in the game. This girl was bought from a farmer family from the country of Firee, a land where personal freedom is prized and slavery is outlawed. There are odd rumors about how she was once a man and was turned into a woman by a curse. Regardless of the rumors, she is a tomboy with no modesty and an affinity for cats. Her Blood Type is B.