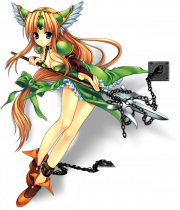 Riesz is one of the Slaves that you can train in the game. She was born a princess in a faraway land. Probably driven by her inhuman blood, she spent her earlier years hunting and subjecting her people to cruel punishments. Eventually, her people revolted. She was captured and imprisoned in a tentacle lair. The tentacles took care of her, with almost reverence, as she bore them many children. After several months, her people took pity on her, freed her, and exiled her. She wandered into Mioya, where she, being tired and demoralized, allowed herself to be enslaved. She has a strange way of speaking and, on occasion, you sense tentacles following her. Her Blood Type is A.