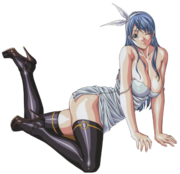 Saori
From: DISCIPLINE -Record of a Crusade-

Created by:
Since Version:
SlaveGirl90.txt