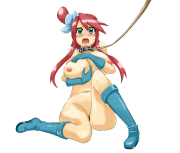 Skyla is one of the Slaves that you can train in the game. Skyla was a waitress in a restaurant aboard a cruise ship. Her boss wanted to have all waitresses start giving passengers blowjobs during their meals, but Skyla refused. When the ship docked again in Mioya, some passengers' belongings were missing, and were found in Skyla's cabin. As punishment, she was sentenced to slavery. You are assigned to train her, and after talking with her, you learn she is a lesbian. She also has a massive crush on her best friend, Elesa. (This is her story in her next update.) Her Blood Type is AB.

Special Actions: Sex with Elesa, Model with Elesa. (Both these will be removed in next update)

Skyla does not have any unique endings. She can only get General Endings and Additional Endings.