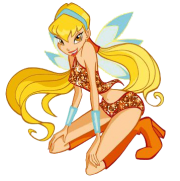 Stella is one of the Slaves that you can train in the game. The Slave Market has recently acquired a group of 7 fairies. However, as they are fairies they are incredibly filled with lust, and crave sex non-stop, and think off nothing else but sex. Before they can be sold, they will need to be trained to behave themselves in public. Rumors say that after a fairy becomes sexually satisfied for the first time, the can actually control themselves, and think of other topics besides sex. However it is unknown if a fairy can even be sexually satisfied.........