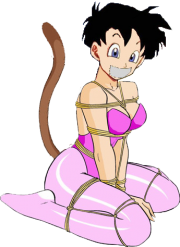 Videl is one of the Slaves that you can train in the game. The World Martial Arts tournament has reached its final round. The returning champ Mr.Satan is fighting against a girl know only as 18. Secretly before the match, 18 made a deal with Mr.Satan. She would intentionally lose, but he had to give her, his daughter, Videl as a slave. He accepted. The next day, 18 comes to you, the Slave Maker, and asks you to train Videl, refusing to tell how the Champ's daughter was now her slave.